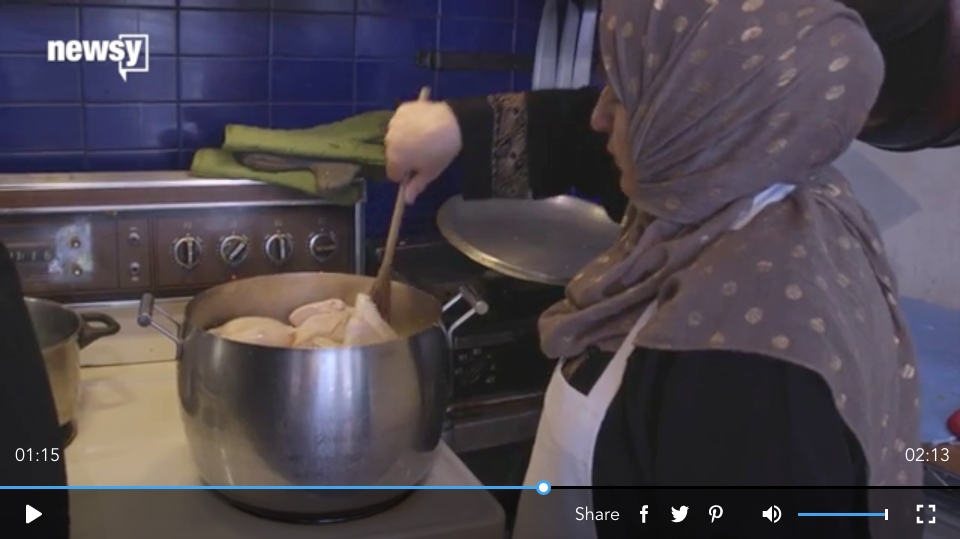 The Depanneur, a culinary lab in Toronto, invites Syrian refugees to cook their native cuisine and share a taste of home with others.

“And they were, like, looking at each other, going, ‘We’re supposed to do the cooking?’ And I’m like, ‘Yeah, yeah. Just come cook,'” said Len Senater, owner of The Depanneur, an eclectic food kitchen in Toronto.

“All of the sudden, the timber of the whole thing changed and they were talking and laughing and cooking and chopping and, it became … just the whole place was just full of life, and I think that’s really when we said okay, this is an amazing thing that we really should do.

“I’m Len Senater. I run The Depanneur here in Toronto. The Depanneur is a place where interesting food things happen. It’s a venue I established about five years ago to showcase the amazing diversity of culinary talent we have in the city.

“You know, as the news stories started coming out that there were families that were in the hotels for extended periods of time that didn’t have access to kitchens, couldn’t cook for their family or themselves, and I mean, I have this big kitchen; it’s not being used necessarily during the day. … Could I just invite them to use the kitchen so that they could use it to make food for themselves and their family?

“It seemed like a pretty simple idea and kind of a natural extension of the way we open our kitchen to people anyways. If you combine newcomers with kitchens, all of these incredible opportunities start to emerge. So, they have an incredible skill set, and how do we recognize the skills they already have, and how can we create a path where they can take the skills they have and turn them into ways they can support their families? We win, too, because it makes the city a more delicious place to be, and we’re getting these amazing foods that a lot of people have never tried before.

“There’s also this idea that although this issue was born in a specific crisis of this particular group not having kitchens for a short period of time, what became clear is that the essential idea is much bigger than that. This can be done with any newcomer community, or any marginalized community, in any kitchen willing to open its doors, in any city in the world.

“So part of this project is also trying to figure out how to unpack that idea and realize the full potential. Can we open-source this idea and get it out into the world where its impact can amplify and magnify wherever it lands?”