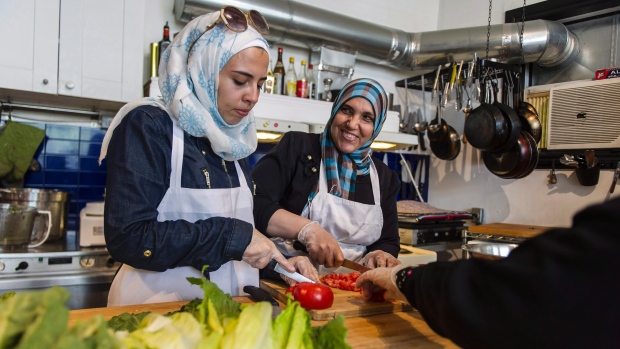 by Lois Abraham, The Canadian Press

TORONTO — Walking into the Newcomer Kitchen, one’s senses are assailed. Chopped onions bring a tear to the eye, the scents of lemon and mint mingle in the air, and amid the clatter of utensils and pots is the sound of happy chatter as Syrian women discuss combining the ingredients for yalanji — stuffed grape leaves — and gossip a little.

The women, who came from Syria as part of the federal government’s sponsorship program for refugees, were housed for months in hotels with no access to a kitchen to prepare food for their families.

The Newcomer Kitchen in Toronto is the brainchild of Len Senater, founder and owner of The Depanneur, which hosts pop-up food events and workshops. When he heard about the plight of the refugee families, he decided to open his kitchen to them to cook and enjoy communal meals.