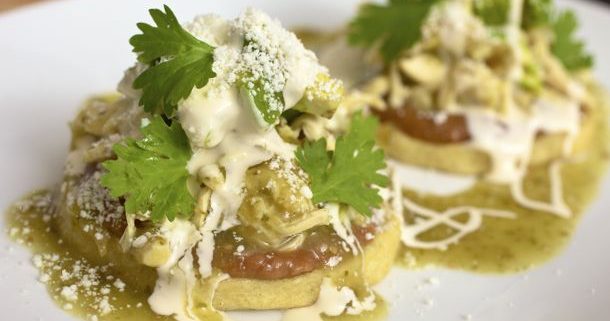 Mexican street food goes way beyond tacos, but we rarely see any of the other amazing delicacies featured on Canadian menus… In this fun, hands-on workshop Erika Araujo will introduce you to two popular Mexican favourites, sopes and tlacoyos, along with recipes for the delicious fillings and salsas that make these dishes shine.
Sopes are a traditional Mexican dish originating in the central and southern parts of Mexico. Like an extra thick tortilla, this circle of fried corn masa has raised, pinched sides to help it hold a wide variety of toppings like black beans, crumbled cheese, lettuce, onions, salsa verde and sour cream.
Tlacoyos are an oval-shaped pre-Hispanic Mexican dish also made from corn masa. Somewhat torpedo-shaped, they are fatter than tortillas and often stuffed with cooked ground beans, cheese or other ingredients before being fried or griddled. These tlacoyos will be served with nopales cactus salad and salsa.
Participants will learn how to make the masa dough and form the sopes and tlacoyos, along with the recipes for the refried beans, green tomatillo & jalapeño salsa and nopales cactus salad. There will be plenty of toppings and garnishes for everyone to customize their own sopes and tlacoyos when the class sits down for a Mexican street food feast!
—–
$60 +HST
—–
Erika Araujo is a trained nurse in Mexico who found her passion for Gastronomy once she migrated to Canada. She completed the Culinary program at Humber College, and since then she has been tirelessly promoting Mexican culture and cuisine through her brand Ixiim Toronto, at workshops and culinary events like TacoFest, Soupalicious and the PanAm Games, where she was the only Mexican chef featured.
—–
Every Monday, The Depanneur invites TO’s best culinary talents to lead fun, hands-on workshops.
Learn more about Workshops at The Depanneur