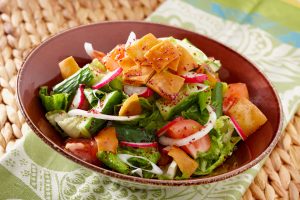 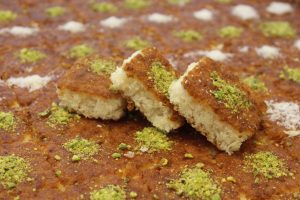 
MENU — July 28
——
[chicken]  Molokhia  ملوخية‎‎
Molokhia is dish that goes by many names; I’ve come across at least half a dozen English spellings alone. It’s based on the leaves of the jute plant (the same one that produces jute fibre for rope & fabric), but known by many other names as well, including West African sorrel, bush okra and Jew’s mallow. This plant has been under cultivation in the Levant for millennia, and was likely on the table of the ancient Egyptians.
While a popular dish throughout the Middle East, it is virtually unknown in North America. I have found only a single local farmer growing it, as an experiment, and she has only found a single customer for it so far. (Well, we can now make it two!). This week’s dish will use some fresh, organic molokhia grown and donated by Kathy Horne of Birdsong Gardens at Fresh CIty Farms in Downsview, as well as imported product sourced at Middle Eastern specialty markets in Mississauga.
For the Syrian version of this dish, this very healthy, dark leafy green is cooked with garlic, coriander and lemon, and combined with shredded chicken that has been cooked separately in a broth with onion and spices. The cooked vegetable is topped with chicken and served alongside Rez bel Shairieh (rice with vermicelli).
[vegetarian]  Molokhia  ملوخية‎‎
The same dish, but topped with whole mushrooms.
Fattoush  فتوش
This popular Levantine salad is made using toasted or fried pieces of pita bread combined with mixed greens, fresh vegetables like tomatoes, cucumber and radish, but vary according to season and region. Mint and parsley lend a freshness and fragrance, and dried sumac (the same staghorn sumac that grows here in Ontario) gives the olive oil-based dressing a distinctive tangy flavour.
Joz Al-Hind  كاتو جوز الهند
A semolina-based cake with syrup, similar to namoura or basbousa, but the addition of lots of grated coconut gives it a rich, macaroon-like quality.
——
$20 +HST
Meals will go on sale on Tuesday at 7am.
Meals will be available for pickup from The Depanneur, 1033 College Street (between Dufferin & Dovercourt) from 6–7pm on Thursday, July 28.
foodora has sponsored FREE Delivery within 3km radius
Please indicate “PICKUP” or “DELIVERY” in the Order Notes at the Checkout.
Tonight’s meal is available in limited quantities. Proceeds from the sales of these dishes help pay for all the ingredients prepared by the moms to take home to their families, with any remaining proceeds shared amongst the cooks. Your support is greatly appreciated.

Newcomer Kitchen is a new project that invites groups of Syrian refugee moms to use restaurant kitchens to cook traditional Syrian dishes in a fun, social setting. Meals are prepared and packaged, and then sold online for pickup or delivery to pay for all the ingredients and provide an honorarium for the cooks.
We also offer 1 spot to help/hang out in the kitchen, learn the recipes and join the ladies for family meal on Thursday afternoon. We are asking for a $50 donation for this, which will go to topping up the $ we have to share with the cooks. This is available for purchase online, on a first-come, first-served basis.

Help us take this idea into any restaurant kitchen, in any city in the world!
Proceeds from the sale of meals goes directly to the newcomer cooks. However this does not cover the costs of the enormous amount of behind-the-scenes coordination required to keep this project going. You can support the Newcomer Kitchen project directly and our vision of expanding this model to support more women in more neighbourhoods!