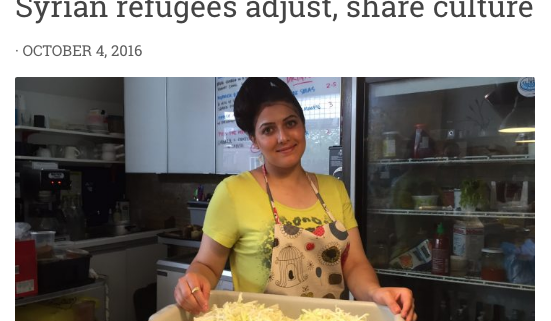 Asma Al Hariri chops zucchini in a downtown Toronto kitchen. She is one of a dozen Syrian women preparing tonight’s Newcomer Kitchen meal. The dish: Sheikh El Mahshi Bil Laban, a traditional Levantine recipe consisting of zucchini stuffed with beef, cooked in a yogurt sauce thickened with eggs and seasoned with garlic and mint, accompanied by Egyptian rice.

Restaurant and culinary incubator The Depanneur hosts the Newcomer Kitchen. The initiative started out as a space for Syrian women to prepare home-cooked meals for their families while they were stuck in hotels upon arrival in Toronto and has since grown into a weekly take-out restaurant.