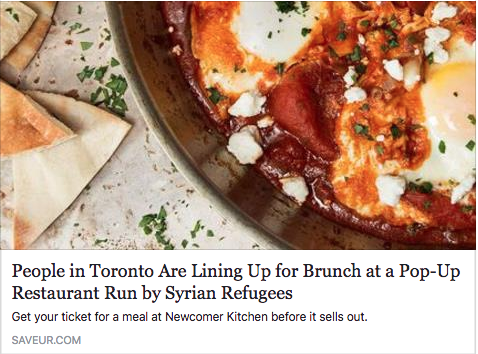 “This is an incredibly ancient culinary tradition,” he says, which means that giving these women an outlet to cook and continue practicing their culture is all the more important. “What happens to all that accumulated cultural knowledge and wisdom if there isn’t a place where they can showcase regional differences…it’s important that they are allowed to continue.”

The hottest new brunch in Toronto doesn’t come from a Michelin-starred restaurant, and it doesn’t feature a trendy pastry mashup. It’s a pop-up staffed by Syrian refugees.

Filmmaker Kelli Kieley has been documenting Newcomer Kitchen since she met its co-founder, Len Senater, earlier this year at the project’s beginning planning stages. “At the time it was just such a beautiful story,” she said. “I just started going, and I didn’t know exactly how amazing this project was going to be, but I knew that it was beautiful, and it has been growing so quickly.”

When Senater heard about the growing refugee population in Toronto, his first thought was about their kitchens. How could they cook for themselves, he wondered, if they were staying in hotels for weeks or months? Senater, who founded event and kitchen space The Depanneur, thought that he could give them access to a kitchen so they could cook for themselves and their families. “We invited these ladies, and they cooked this amazing food,” he said.