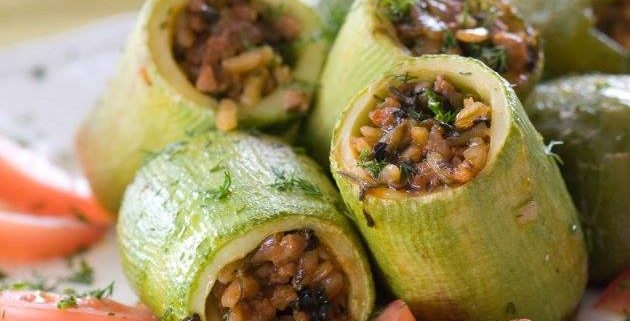 in 2016, The Depanneur reached out to the Syrian newcomer community and has been delighting in the delicious results ever since. Our Newcomer Kitchen project has become something of a local sensation, serving up 50 meals of traditional Syrian home cooking every week.

In that time, many people have expressed tremendous interest in learning some of these fabulous recipes, so for this Family Day Monday, The Dep and Newcomer Kitchen are teaming up to offer a full-day, hands-on workshop delving into a some of our most popular Syrian dishes. The class will cover a number of delicious and traditional Syrian recipes, and will include a meze lunch and food to take home.

Being Family Day, you are encouraged to bring children with you, and kids under 12 are 1/2 price. They can help out in the kitchen and there will also be special cooking activities just for them.

— Morning —
Mutabal kousa (متبل كوسا )
Syrian home cooking is notable for its economy and minimal waste. The pulp scooped out of the middle of the zucchinis when they are cored to make Kousa Mahshi is not thrown out, but rather cooked up and combined with tahini and lemon to transform it into a subtle and delicious meze dip akin to baba ganoush.

Kibbeh bel Senia (كبة بالصينية)
Kibbeh is one of the most quintessential Syrian dishes, made from a thick dough of bulgur (steamed, dried and cracked whole wheat). Many types of kibbeh are individually stuffed, shaped and fried, which can be very labour intensive, but this delicious vegetarian kibbeh is stuffed with a combination of walnuts, potatoes, onions, tomatoes and pomegranate seeds, garnished with pine nuts, baked in a tray like brownies!

Salateh Naameh سلطة ناعمة
This essential Mediterranean salad can be found throughout the middle east, with tomatoes, cucumber, and white onion are finely diced and seasoned with olive oil, mint and lemon juice.

— Afternoon —
Kousa Mahshi كوسا محشي
Stuffed zucchinis were cherished by the former Ottoman Empire, and they made them popular from the Balkans to the Levant. Most popular are the beautiful, pale green young marrow or summer squash, but regular zucchinis work just fine. They are hollowed out with a special implement called a manakra (an apple corer works well in a pinch), and stuffed with a mix of ground halal beef and rice, or a spiced rice mixture for a vegetarian option.

Namoura (نمُّورة )
An classic Syrian dessert, a rich buttery semolina and yogurt cake, garnished with almonds and drizzled with a orange-blossom infused syrup.
—–

—–
Newcomer Kitchen is a new project that invites groups of Syrian refugee women to use our kitchen to cook traditional Syrian dishes in a fun, social setting. Meals are prepared and packaged, and then sold online for pickup or delivery to pay for all the ingredients and provide an honorarium for the cooks. The project now supports over 55 women and paid out over $30,000 directly into the community in 2016.