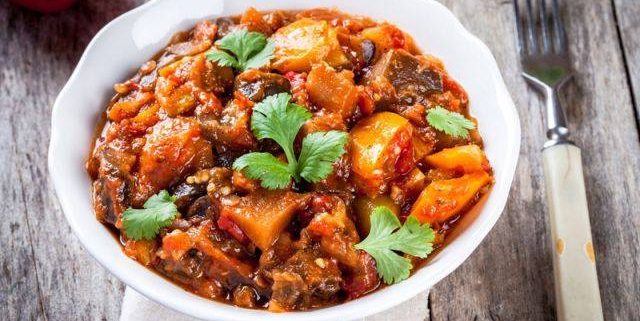 [Lamb] Tabakh Rohoo روحو طباخ
The cold winter months are the time to break out the luscious, slow-cooked comfort foods like this delicious tomato-based eggplant stew with zucchini, potato and small cubes of lamb, garnished with coriander. Tabakh Rohoo is one of the most popular dish in Syria and originally comes from Damascus city. Similar to North African tagines or Persian khoresh, it is redolent with warm spices and sometime enriched with some melted ghee before serving.

Tabakh Rohoo is known as “Cook’s Soul”; whether that’s from the deeply comforting qualities of this kind of “soul food” or if it’s that the long, slow cooking transforms the humble ingredients into revealing their sublime nature, is up to you to decide.

One legend tells of a princess named Rohoo (“my soul”), was such a picky eater that she became ill. Her distraught father, the king, called for chefs from across his kingdom to come up with a dish his daughter would eat. After many failed attempts, finally a cook named Nader came up with a dish that Rohoo loved; he became her dedicated chef, and this dish was named in her honour.

[Vegetarian] Tabakh Rohoo
An equally rich and delicious vegetarian version of the stew is fortified with chickpeas. Both are served with Rez bel Shairieh بالشعریة رز , a pilaf of rice and fried vermicelli noodles

Zalabeh  زلابیة
Donuts are a universal language. Sticky sweet fried dough desserts can be found all over the world and this Syrian treat is right at the intersection of Greek loukoumades, Mexican churros and Indian jalebi. Flour dough tinted with turmeric, and flavoured with anise and mahlab (a almond-like spice made from cherry stones), fried until crispy and dunked in grape molasses.

Flat Rate 6km Delivery
If you live outside the 3km free delivery zone, foodora can deliver for a $10 within a 6km radius
(approx. Park Lawn to DVP, Eglinton to Lakeshore) MAP

—–
Newcomer Kitchen is a new project that invites groups of Syrian refugee women to use our kitchen to cook traditional Syrian dishes in a fun, social setting. Meals are prepared and packaged, and then sold online for pickup or delivery to pay for all the ingredients and provide an honorarium for the cooks.

We also offer 1 “Guest Cook” spot to help/hang out in the kitchen, learn the recipes and join the ladies for family meal on Wednesday (10:30-4:30). We are asking for a $50 donation for this, which will go to topping up the $ we have to share with the cooks. This is available for purchase online, on a first-come, first-served basis.

Proceeds from the sale of meals goes directly to the newcomer cooks. However this does not cover the costs of the enormous amount of behind-the-scenes coordination required to keep this project going. You can help the Newcomer Kitchen project directly and our vision of expanding this model to support more women in more neighbourhoods!

Help us take this idea into any restaurant kitchen, in any city in the world!
Support Newcomer Kitchen